Brahmastra Part One- Shiva, the first installment of a planned trilogy, released in theatres two weeks ago. The film, helmed by Ayan Mukerji, stars Ranbir Kapoor and Alia Bhatt in the leading roles. Soon after the movie released, several fan theories about Brahmastra and the future of the franchise started floating on social media. From discussing whether Alia’s character Isha is the real villain, to wondering whether Shah Rukh Khan’s character Mohan Bhargav is really dead, there were numerous creative theories about Brahmastra that also garnered director Ayan Mukerji’s attention.

A few days ago, Ayan Mukerji shared a post in which he acknowledged the amazing fan theories and mentioned that he will definitely be using some of the theories in the future. Now, Star Studios has shared a video that shows Ayan Mukerji addressing fan theories related to Shiva, Isha, and their connection with Dev. In the video, Ayan can be seen sharing his vision behind the story of Brahmastra. Sharing the video on her Instagram stories, Alia Bhatt has now reacted to the fan theories. In her caption, she wrote, “Loving all the fan theories.” Check out her story below. 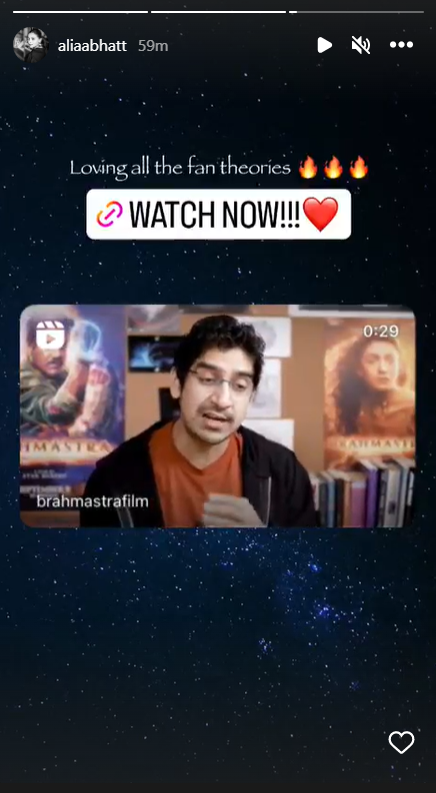 Meanwhile, a section of Twitterati noticed Alia Bhatt’s character Isha wearing the same ring that Dev wears in the movie, leading them to wonder if there’s more to Alia’s character than meets the eye. However, Ayan has now addressed this fan theory, and said that it was something that the audience noticed, but there was no such connection in his mind while making the film. “Alia wears a ring that Dev also wears. To be honest, we had no connection in our mind. It was something that the audience caught on to, and it was a nice catch. That’s the layer the audience caught, and it wasn’t in my mind,” he said.

Ayan Mukerji also shared that Ranbir Kapoor’s character Shiva and his connection to the Brahmastra is a continuing track. He mentioned that the next installments in the franchise will bring a lot more focus on what happened actually happened with the Brahmastra.