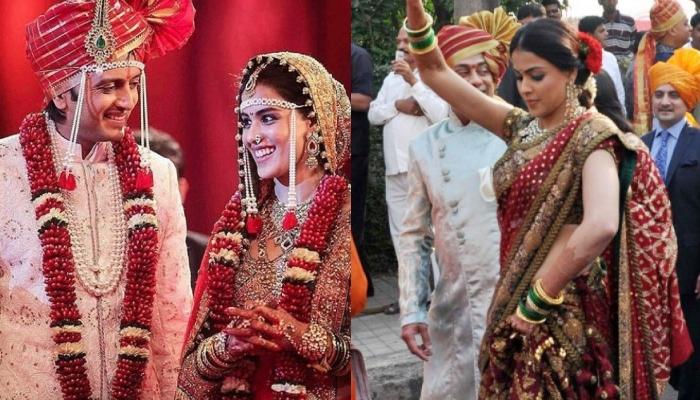 Genelia Deshmukh never leaves a chance to show off her true self. Over the years, she has beautifully taken care of her family. The actress left everyone stunned when she tied the knot with Riteish Deshmukh on February 03, 2012. From being co-actors to being lovers and then life-partners, the duo has been together for over a decade.

However, we are not talking about Genelia’s love story, but her fashion choices. The actress left us stunned when she re-wore her wedding day lehenga for two important family functions. Yes, Genelia had first re-styled her wedding lehenga for her brother-in-law, Dheeraj Deshmukh on February 28, 2012. Later, she wore it again for her brother, Nigel D’Souza’s wedding on April 15, 2015. And, media went berserk with pointing this out to the entire world (as if, Genelia wasn’t aware of it!). Well, we personally loved to see a celeb as stunning and stylish as her, wear the same dress again. 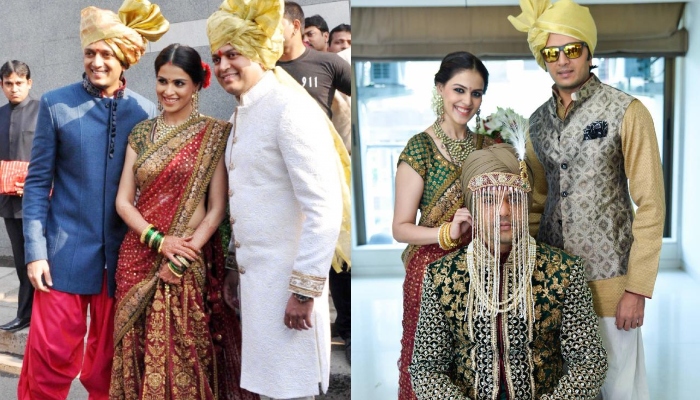 Now, we often come across girls, who would prefer to be caught dead than repeating the dress they wore for their sister’s engagement or their best friend’s wedding. If you don’t agree with this, then put your hand on your heart and think, if not yourself, then how many of you have at least one friend or cousin, who would sulk at the thought of having to wear the same dress twice? What’s more? It doesn’t matter if that dress is being worn for two entirely different and unconnected crowds. Statements like, “it is out of fashion” or “everyone has seen the pics”, will be flying around.

So, let us tell you why we feel that Genelia and her lehenga are absolutely rocking:

#1. A lehenga that is close to the heart 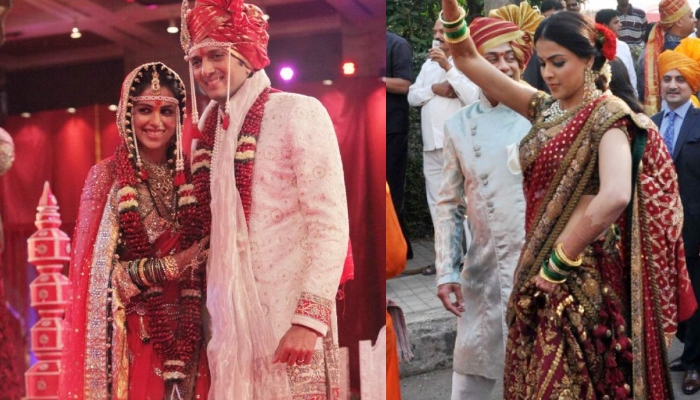 Riteish and Genelia had tied the knot on February 3, 2012, and Dheeraj Deshmukh got married on February 28, 2012. So, this was the first official family wedding that Genelia got to be a part of as the Deshmukh bahu, and that would make everything about that celebration, including the lehenga even more special for her. Maybe that is why; this lehenga is close to her heart. And, we totally heart anything that gives us a chance to get an emotional high; that is why we totally love this lehenga!

#2. An outfit that becomes a keepsake

For Genelia, her lehenga is now more of a treasure trove of memories. Along with her, the dress too has witnessed two happy occasions in her close family. From her brother-in-law’s wedding to her brother’s, she has simply turned an outfit into a keepsake and a memento of two happy occasions in her life. There are very few dresses that would make you as nostalgic as your own wedding lehenga, and what you wear at your siblings’ wedding is definitely one such, right? Again, we are emotional fools out here, and high-five for this decision Genelia! 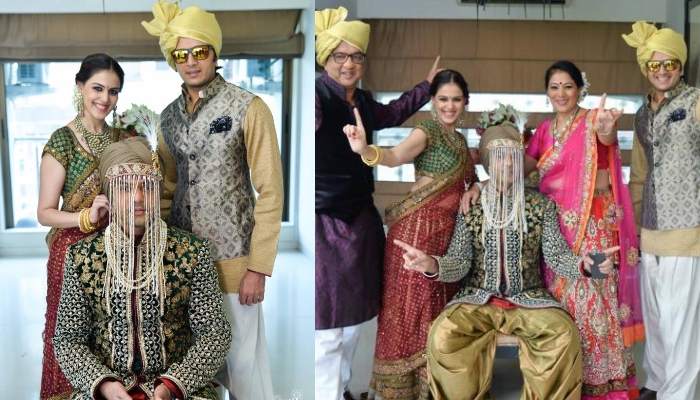 Yes, that Sabyasachi lehenga is a classic. Green and red are evergreen Indian wedding colours, and the heavy work on it, makes them even more stunning. And, maybe that is what made her wear this lehenga again (sorry, but we are going to keep the word ‘repeat’ off this list now). Well, if you really like an outfit and it complements you, then go ahead and wear it. Also, who says wearing the same outfit is a fashion faux pas? Who says wearing the same outfit again is not a trend? Well, with this, Genelia might have started a trend, and we like it!

Love to follow Bollywood couples and their fashion statements? Then, do look at these 20 Famous Bollywood Divas And Their Wedding Day Look

#4. No problem in being different (even through repetition)! 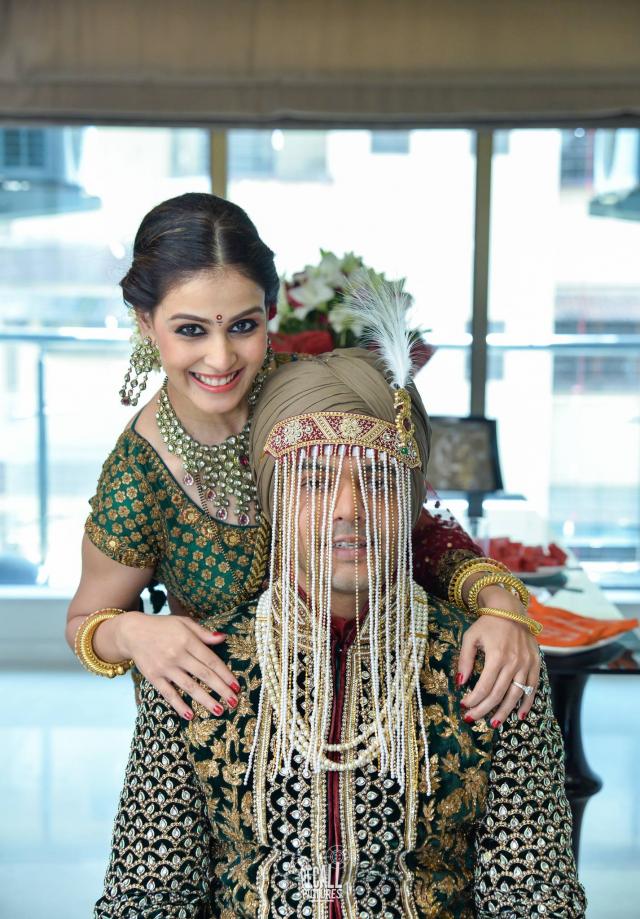 At her sangeet ceremony, Kareena Kapoor wore the same jewellery that she wore years ago at her sister Karisma’s wedding (Read Here). Well, if jewellery can be repeated, then what is the big deal with an outfit? Also, we have seen copycats in Bollywood. Divas have been caught wearing the same or similar outfits every now and then. But, how many times have we seen them repeating their own outfit? Well, maybe just a handful or even less. And, don’t you think Genelia herself knows that she has worn it before? Obviously, she does, and that is what makes her different. And, we totally love that attitude. You go girl!

Recommended Read: Top 10 Wedding Reception Looks Of Bollywood Brides That You Can Steal 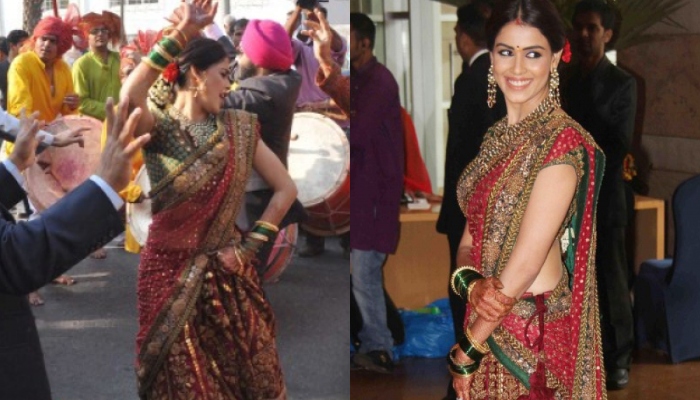 It is a saving grace for all those mothers, who are tired of hearing their daughters crib about, “Maa, you can’t expect me to wear the same saree that I wore to my colleague’s wedding two years back, to chachi ji ke behn ke bete ke beti ki wedding”, or “Arre sabne Facebook pe meri pics dekhi hui hain in that anarkali, how can I wear it again?” Forget about your FB friend list, hadn’t Genelia been clicked enough at one wedding for the entire nation to remember what she wore? And yet, she chose to wear it again and that too with such grace.

So, we totally heart Genelia’s choice of wearing the same lehenga at two different weddings. Not everyone has lakhs to shell out on shopping sprees. What’s more? Genelia shows that even though you have all the money and stylists in the world, some things are meant to be ‘repeated’ once in a while!

Next Read: Steal The Look- What Celebs Wore to their Sibling’s Wedding