Plot: Between 1978 and 1991, Jeffrey Dahmer gruesomely took the lives of seventeen innocent victims. DAHMER – Monster: The Jeffrey Dahmer Story is a series that exposes these unconscionable crimes, centered around the underserved victims and their communities impacted by the systemic racism and institutional failures of the police that allowed one of America’s most notorious serial killers to continue his murderous spree in plain sight for over a decade.

Review: The clumsily titled DAHMER – Monster: The Jeffrey Dahmer Story is at once one of the best and one of the worst series of 2022. As Ryan Murphy’s mega-deal with Netflix chugs along, this true crime drama tries to take a unique vantage on one of the most disturbing figures of the 20th century. While managing the most gruesome elements of Dahmer’s crimes from the perspective of his mutilated victims, Monster is at once a well-filmed and structured series that manages to be extremely difficult to sit through. While the subject itself is already difficult to process, Monster manages to also move so slowly that it makes it challenging to stay focused on the story being told.

The ten-episode series was not screened in advance for critics which usually does not bode well for the quality of the production. Reuniting Ryan Murphy with his longtime producing and writing partner Ian Brennan, who co-created Ratched, Hollywood, and Halston, Monster tries to combine elements from the FX series American Crime Story with a different perspective from the countless documentaries and films about Jeffrey Dahmer. Shifting from Dahmer’s arrest in the first episode to flashbacks to his various murders, the first half of the episodes in this series try very hard to personalize the dead and not sensationalize Dahmer himself. The second half of the season focuses on Dahmer’s trial and incarceration with a great deal of time spent on how the media circus impacted not only the Dahmer family but the families of his victims.

Frequent Murphy cast member Evan Peters is chilling as Dahmer and does an amazing job of replicating the serial killer’s mannerisms, speech patterns, and almost robotic disposition. As I began watching the first episode of the series, I could not tell if Peters was going to take this performance in a direction similar to his work on American Horror Story and play the role a bit more broadly, but the actor is very restrained. Surprisingly, the entire series is restrained compared to much of Murphy and Brennan’s work. There are moments of violence and blood in Monster but most are shown after the fact. The series stays away from showing many of the murders themselves but rather gives us scene after scene of Dahmer punishing himself for his actions and regretting his loneliness. The series struggles here to not have us sympathize with Dahmer despite giving us so much time devoted to learning about why he did what he did.

The supporting cast around Peters does the best they can with their roles, especially Richard Jenkins as Lionel, Jeffrey’s father, and Molly Ringwald as stepmother Shari. Niecy Nash is quite good as Dahmer’s neighbor who notices his odd behavior and the horrible smell coming from his apartment. We also get a solid turn from Penelope Ann Miller as Dahmer’s mother, Joyce, along with some other familiar faces throughout the series. The challenge in telling such a disturbing story as is how to balance humanity with inhumanity. While the crimes are not shown explicitly, there is a lot of focus on Jeffrey Dahmer dealing with his homosexuality and ingrained societal homophobia. The dialogue often feels cliche and heavy-handed as we are supposed to analyze Dahmer’s crimes and the crimes committed against him as a gay man in the 1980s.

While Ryan Murphy only had a part in scripting the first four episodes, co-creator Ian Brennan shares credit on every episode aside from one. The ten-episode journey this series takes often feels like it could have been condensed into half the time and still have gotten across the same result. With five directors helming the series, Murphy and Brennan selected all filmmakers who are either black, female, gay, or a combination. Veteran television director Paris Barclay helmed two episodes while Carl Franklin tackled the first with indie filmmakers Greg Araki directing one and Clement Virgo two. Jennifer Lynch did the brunt of the work here as she directs four episodes of the series. The varied talent behind the camera lends a high caliber to the visual scope of the series which is awash in night shots and heavy shadows. A lot of the series reminded me of the film Henry: Portrait of a Serial Killer in the uneasy framing and the very quiet, almost music-free majority of the series.

Dahmer – Monster: The Jeffrey Dahmer Story premieres just about a month before Netflix unveils their latest Conversations with a Killer season dedicated to the same crimes. Something about Dahmer’s story feels wrong to be told in a dramatized format and should be left to documentary filmmakers. It is a shame as Evan Peters delivers a haunting performance and both Ryan Murphy and Ian Brennan have created one of their strongest series to date. It is just a shame that the subject matter feels wrong. Everyone involved with this show does an admirable job of trying to tell this story in a way that would not offend but rather inform. The end result is just too slow and too uncomfortable and is not worth the investment in watching it. 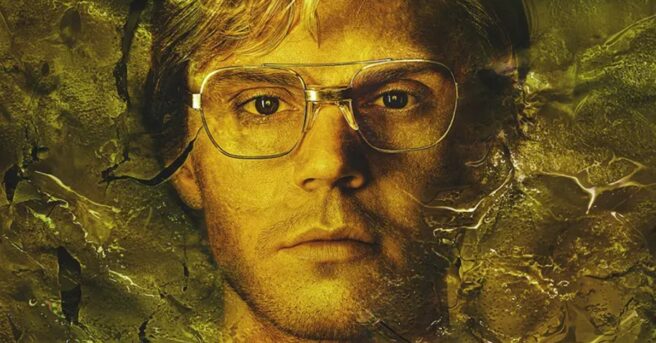