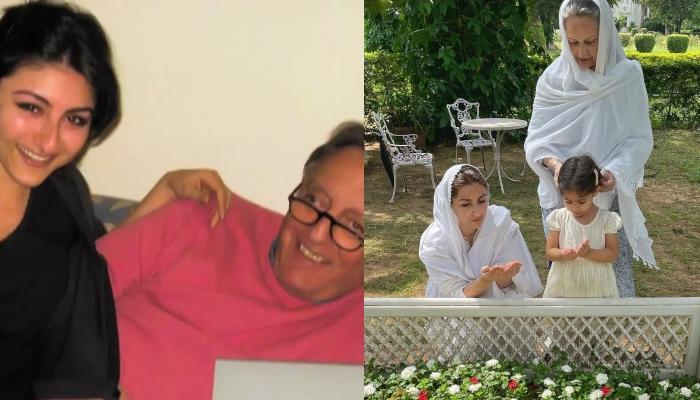 Fondly known as Tiger, Mansoor Ali Khan Pataudi, was one of the best captains of the Indian cricket team. In his career spanning over almost 15 years, he played 46 matches for India and left the spectators jaw-dropped with his awesome performance. His contribution to the world of cricket is commendable, and his legacy is unmatchable till date. However, in 2011, Mansoor left for his heavenly abode at the age of 70 after his long battle with a lung infection.

On the personal front, Mansoor Ali Khan Pataudi had got married to actress, Sharmila Tagore, in 1966. The couple was blessed with three children, Saif Ali Khan, Saba Ali Khan, and Soha Ali Khan. While Saif and Soha followed in their mother’s footsteps and became actors, Saba opted to become a jewellery designer. September 22, 2022, marked Mansoor Ali Khan Pataudi’s 11th death anniversary, and his daughter, Soha Ali Khan shared an old video of the Nawab of Pataudi on her IG handle. In the video, the legendary cricketer can be seen talking about life without his father as he revealed how he dealt with his loss. He also mentioned that living without a father is not so easy and added that he had realised it slowly. He can be heard saying:

“My mother came and told me my father was no more. I was very young and didn’t even realise what it meant. It was only over time that it sunk in that it isn’t easy to live your life without your father.”

For the unversed, Mansoor Ali Khan Pataudi’s father, Nawab Ifthikar Ali Khan Pataudi, was also an international cricketer. He had lost his father in 1952 at the mere age of 11. Along with the video, Soha wrote a short heartfelt note, which can be read as “How I miss that voice.” Taking to the post’s comment section, her sister, Saba Ali Khan Pataudi wrote:

“I posted this long back.. thanks for the reminder.”

Next Read: Gauri Khan Opens Up On Son, Aryan Khan’s Arrest For The First Time, Says, ‘Nothing Can Be Worse’

On the other hand, Soha Ali Khan’s elder sister, Saba Ali Khan also paid tribute to their father on social media. Saba took to her Instagram handle and shared a photo frame of her dad, late Mansoor Ali Khan Pataudi. The picture also showed a bamboo plant and a candle placed next to the photo frame on the table. Atop the picture, the doting daughter penned:

On the work front, Soha will be next seen in the web series, Hush Hush.

Next Read: Alia Bhatt-Ranbir Kapoor Reveal Who Apologises First After A Fight, Share Who Is The Biggest Critic